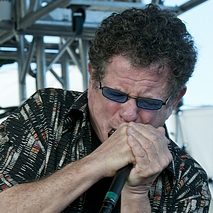 Blues Blast Magazine Asks, “How does Lee Oskar perceive his connection to the Blues?”

“Number one, Blues is a feeling you’ve got inside. So let’s take it outside of the cliché that people think is the Blues. From ancient times, wherever there has been humanity, there has been Blues. It doesn’t matter if they’re playing a Seraiki in Pakistan or a Folk song played on a shamisen in Okinawa. There’s the Blues. They’re talking about the same thing. They are crying about the same thing. Even when you hear Classical music performed, there’s the Blues. The Blues is bigger than just the 1, 4, 5 chord changes. …Read More