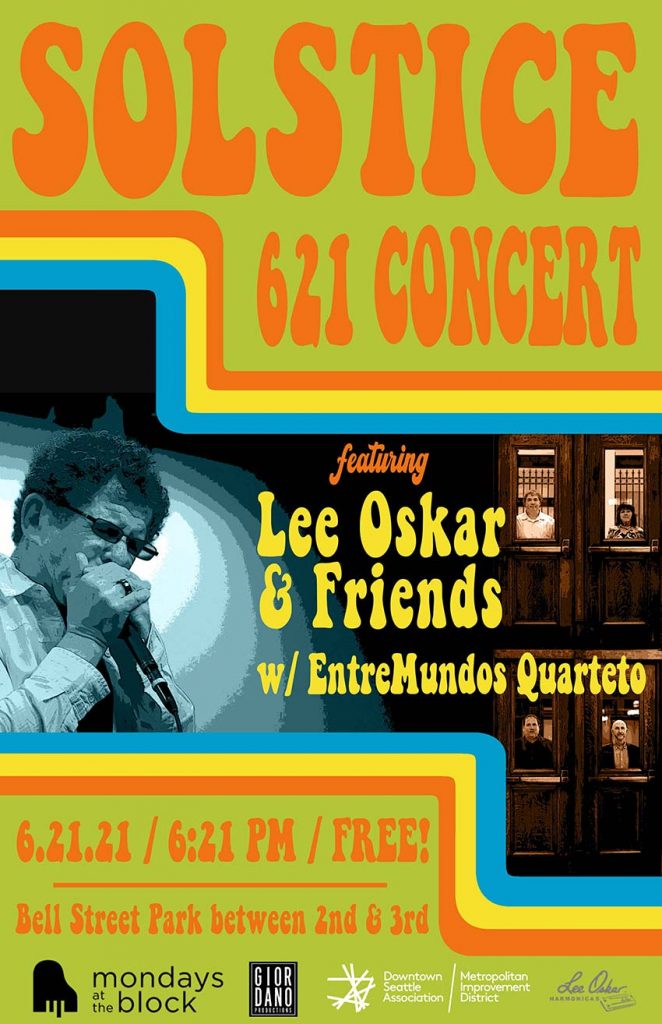 SOLSTICE 621 CONCERT  Featuring Lee Oskar & Friends with EntreMundos Quarteto
Let’s celebrate the Summer solstice and the return of live music at Bell Street Park between 2nd & 3rd in Belltown, Seattle. FREE CONCERT!
Lee Oskar is an internationally acclaimed harmonica virtuoso, composer, producer, and lifelong musical explorer. He is renowned for his iconic role as a founding member and lead harmonica player of the pioneering funk/jazz band that composed and recorded such hits as “Low Rider,” “Spill the Wine,” “Cisco Kid,” “The World is a Ghetto,” “Slippin’ into Darkness,” “Why Can’t Be Friends,” and many more chart-topping songs from 1969-1993. Since then, Oskar and his original band mates from that era perform as the LowRider Band. Oskar also performs around the world with outstanding musicians from the Pacific Northwest, known as Lee Oskar and Friends, featuring his own new arrangements, innovative compositions and well-loved hit songs.
EntreMundos Quarteto is an electrifying Seattle-based band who bring to the stage an uplifting and kinetic mix of deep Brazilian roots flavored with world rhythms—a deft blending of funk, jazz and soul melding with the classic sounds of samba and bossa nova. EntreMundos means “between worlds,” and the group’s mélange of seductive sounds embodies their name, stirring a personal and uncommon blend into a sound with universal appeal.
Website: www.entremundosquarteto.com
Concert begins at 6:21pm on June 21, 2021 at Bell Street Park, between 2nd Ave and 3rd Ave.
Presented by Mondays at the Block
Special thanks to our sponsors:
Event producer: Giordano Productions
Sponsored by Downtown Seattle Association and Market to Mohai
Food and beverage will not be served at the event so we encourage you to support Belltown restaurants and bring take out to enjoy the concert!
Did we mention this concert is FREE?