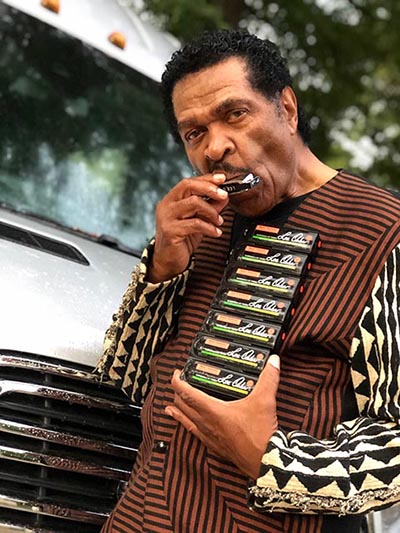 Bobby Rush is a 2017 Grammy Award-winning blues legend, Blues Hall of Famer, 12x Blues Music Award winner, and B.B. King Entertainer of the Year. An American blues musician, composer and singer, Bobby played with Delta blues guitarists Boyd Gilmore and Elmore James in Arkansas during the early ’50s before migrating to Chicago. There, he assembled a band with an equally young Freddie King on guitar (Luther Allison came into the combo later). Rush gigged around the West Side and in the southern suburbs of the Windy City, but it took until 1964 for him to debut on record with the tough downbeat blues “Someday” for the Jerry-O logo. He encored with “You’re the One for Me” for the Palos imprint, a single so obscure that a copy couldn’t be located for inclusion on Omnivore Recordings’ award-winning four-CD box set Chicken Heads: A 50-Year History of Bobby Rush, which spanned his entire career to that point.

Bobby’s “Sock Boo Ga Loo” on the tiny Starville label was picked up by Chess Records in 1967, propelling the singer into the big leagues of R&B. “Gotta Have Money,” his funk-drenched ’68 single for ABC, and the Sonny Thompson-produced “Wake Up” the next year for Salem Records showed Rush had what it took. In 1971, Bobby broke through on the national charts with the lowdown funk grinder “Chicken Heads” for Galaxy Records.The song has since been featured in the film Black Snake Moan, HBO’s Ballers, and more. Calvin Carter, the producer of “Chicken Heads,” put out Rush’s ’72 followup “Gotta Be Funky” on his own On Top logo and then sold Bobby’s contract to Stan Lewis’ Jewel Records in Shreveport, LA. Lewis issued several Rush singles before Bobby made the major label leap in 1974 with “Get Out of Here” for Warner Bros.

His sparkling album Rush Hour for Kenny Gamble and Leon Huff’s Philadelphia International empire should have made Bobby a huge star in 1979 but didn’t receive its proper praise until the 2000s, when Rolling Stone recognized it as one of the best blues albums of the ’70s.

Bobby’s reputation for spectacular live performances continued to grow exponentially as he did a minimum of 200 shows a year, while he built a vaunted reputation on the “chitlin’ circuit” and cut a series of memorable albums for Urgent!, Waldoxy, and his own Deep Rush Records. His mainstream recognition campaign commenced when he earned his first Grammy nomination for his 2000 album Hoochie Man, followed by an appearance in the Martin Scorsese-produced 2003 PBS docu-series The Blues with his own segment in the episode The Road to Memphis.

To date, Bobby has earned 12 Blues Music Awards and 48 nominations, including the prestigious B.B. King Entertainer of the Year Award and Album of the Year, and in 2017, a Grammy Award for his album, Porcupine Meat.  Rush co-starred in the 2014 documentary Take Me to the River alongside Terrence Howard, Snoop Dogg, and Mavis Staples. That same year, Bobby joined Dan Aykroyd on The Tonight Show With Jimmy Fallon to perform two songs, marking his first late-night television appearance.

Bobby’s performance itinerary has encompassed some of the biggest music festivals around the world, from Chaifetz Arena in St. Louis to Byron Bay Bluesfest in Australia, countless European engagements, the Fuji Rock Festival in Japan, and closer to home, Bonaroo and the New Orleans Jazz & Heritage Festival. Rush was the first bluesman to perform at the Great Wall of China, attracting an audience of more than 40,000 and earning him the title of “China’s Ambassador of the Blues.”