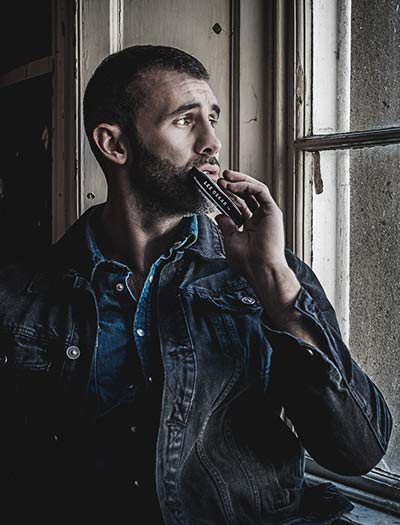 Dan Murphy is lead singer and multi-instrumentalist for Irish band Hermitage Green. He plays guitar, piano, harmonica, dobro, banjo, and didgeridoo. He grew up in Limerick and started playing music at the age of fifteen. He studied music and media in the University of Limerick, and on graduation, formed the band Hermitage Green with his brother Barry and three friends. Some of his influences are: John Grant, Phillip Henry, Steve Lockwood and Rory Mcleod. He has also spent time in India studying Hindustani slide guitar under Grammy Award- winning slide guru Debashish Bhattacharya. Hermitage Green blend elements of folk music with pop and rock styles. Their line-up features four-part vocal harmonies, harmonica, didgeridoo, dobro and guitars; all infused with tribal rhythms played by two percussionists using djembe, drum kit and a traditional Irish hand drum called a bodhran. In 2015, they signed a record deal with Sony and released their debut album ‘Save Your Soul’ in early 2016, which went to #2 in the Irish charts. They regularly play sell-out tours across North America, Australia, Ireland and Europe, and have toured with The Pogues, Josh Ritter, The Trews, Gavin James, The Coronas, and many more. Apart from music, Dan is passionate about traveling. He hosts his own podcast called ‘The Chat with Dan Murphy‘, and also runs a travel website called www.globalvillagetours.ie where he takes people on guided trips to places like North Korea, Chernobyl, Iran, Cuba and Antarctica.