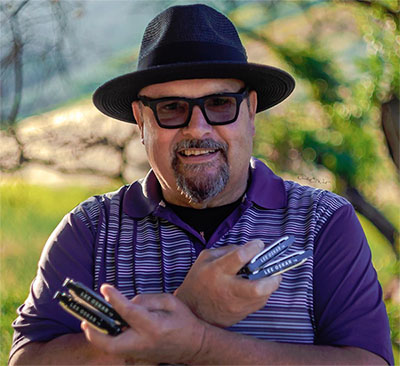 Harmonica player, singer and songwriter Darryl Carriere is the leader of The PCH Band and also performs with the Celso Salim Band. Darryl won the Lee Oskar Harmonica Award as best player of the 2019 International Blues Challenge and is now working on new albums with both bands.

Born and raised in Santa Monica, CA, Darryl started playing harmonica around 12 year of age influenced by his junior high school buddy Lester Butler, who later became a world famous Blues artist. One day Darryl heard Lester blowing his blues harp in the school hallways and the sound coming from that instrument completely captivated him and he was hooked for life.  A self-taught musician, Darryl started playing the instrument upside down and when he realized that it was too late and that’s how he developed his technique. In the late 70’s, around sixteen years of age, Darryl joined The Soultones and played in that band for many years, performing all over Southern California.

The Soultones broke up in the early 90’s and for a few years Darryl played as a sideman with different bands. In 1997 he met young Brazilian guitarist Celso Salim, who was studying music in the US. With great musical chemistry they formed a Blues band called “The Green Lizards”, which had Darryl for the first time as a lead singer. Before Celso returned to Brazil in the year 2000, Darryl participated in his first solo album “Lucky Boy’ co-writing songs and recording vocals & harmonica. They stayed in contact and Darryl toured Brazil with Celso in 2004 and also recorded on many of Celso’s albums including Going Out Tonight (2004), To The End Of Time (2014) and Mama’s Hometown (2018).

In 2014 Celso moved back to the US and they started performing together again. Frequently featured as a special guest with the Celso Salim Band, in 2018 Darryl joined the band for the 2019 International Blues Challenge where they won two awards: The band won Third Place in ‘Band Category’ and Darryl won the ‘Lee Oskar Harmonicas Award’ as best harp player of the year. Also with the Celso Salim Band, he opened up for renowned artists Canned Heat, Joe Louis Walker, Jason Ricci and Kim Wilson among others.  They are now working on a new album together to be released in 2019.