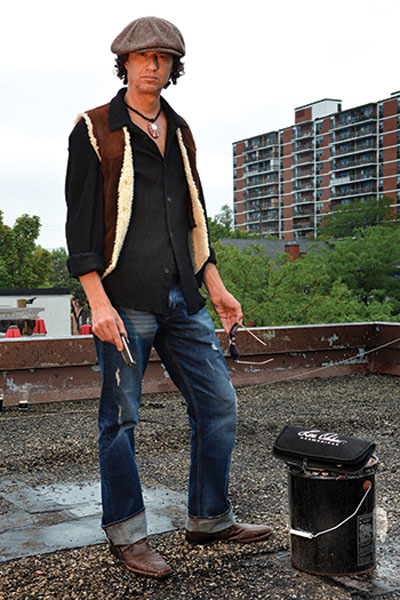 Throughout his career, David has performed with many musical greats, including Lee Oskar, (original co-composer of such megahits as  “Lowrider”, “Spill the Wine” and “Slippin Into Darkness”); the legendary Jack de Keyzer Band; Ronnie Hawkins; ex-Muddy Waters drummer Willie “Big Eyes” Smith; Madagascar Slim; Mel Brown; Jeff Healey; Johnny Winter; Edgar Winter; Finis Tasby; James Cotton; Magic Slim and The Tear Drops; Elvis Costello; Shakura S’Aida, and members of the Downchild Blues Band, among others. He began his career as leader of his own band, The Blue Canadians, which toured internationally.

David has been recognized for his exceptional music talent by the following awards:

David’s debut album, “Blowin’ for Broke” (Stone Pillar Studios) was nominated “Blues Album of 2001” by the Canadian Independent Artist Association and was winner of the Maple Blues Award “Best New Artist of The Year 2002.”

In 2007, David recorded and released his live album, “Live at Roc ‘N Doc’s.” In 2008, it was considered in the top twenty blues albums released that year by numerous community radio stations with blues format shows.

In 2009, David released his fourth album, “No Looking Back,” which again featured Enrico Crivellaro on guitar and Jeff Healey’s keyboardist Dave Murphy on organ. The album was met with overwhelming response from fans both new and old, as well as music industry acclaim.

In 2012, having performed regularly with a group of Estonian musicians, David released his first DVD “David Rotundo Live.”

From 2015-2019, David co-produced and performed in a series of Mexican festivals, including the Annual Blues Festival in Puerto Escondido, and “Blues on the Beach” in Huatulco. He has performed at the Huatulco festival every year since its inception in 2012. In 2019, David and Lee Oskar performed together in both of these locations.

In 2019, David became a Lee Oskar Harmonicas Featured Artist, and began working closely with Lee Oskar, to produce his latest album: “So Much Trouble” (Dreams We Share Productions, 2020).