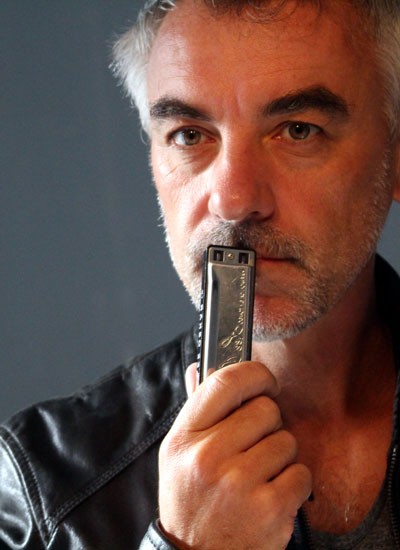 After 30 years as a journalist in local radio & TV stations, Toulouse area, Greg is making a clean break as a full time writer and musician.

He’s been playing harmonica since age 13, when he found a diatonic on his daddy’s shelf, and began to play western movies themes ; then he saw Junior Wells in concert… one solo by Paul Butterfield (in the song One More Heartache), another by Lee Oskar (in Gipsy Man), then the sounds of Miles Davis and John Coltrane, blew his mind of french suburban teenager.

Throughout the 80’s, Greg played with various blues and country-rock bands, sat up Fool For Love quartet to sing his own songs, then entered the mighty Eric LaValette band in 2003 where he still tries today to sound like a blend of Magic Dick and Zappa (hum).

He joined Facteur Zèbre in 2010 (poetry & electricity), and the folk singer Jefferson Noizet in 2011 with a full set of his other instruments including dobro and Telecaster, and he’s now also touring with the actress Corinne Mariotto (Calamity Jane, letters to her daughter), playing low-tuned harmonicas, parlor guitar, dobro squareneck, banjolélé, even flute, and singing about outlaws ans Indians, loneliness in the West. Beside, sometimes, artists like Tony Marcos or Liz McComb make a phone call and Greg brings his harps in the studio or on stage.

But all these years, Greg spent a lot of time writing and recording music for harmonica(s) in his home studio, specially inspired by the minor tunings invented by Lee Oskar, some chromatic too.

With this bunch of songs and a new powerful band, he will blow his horn at the next Festival Jazz sur son 31… and a CD will be available in the beginning of 2016…