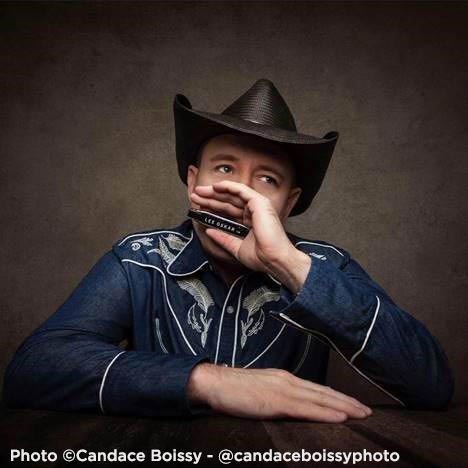 Jeremy Parks’ unique sound traces back to his early childhood and perfectly blends the distinct twang of country, the vibe of Americana, and the authenticity of bluegrass. His hybrid, signature sound is demonstrated beautifully in his debut album, “Roots,” which was released to critical acclaim in 2019.

Jeremy’s colorful musical career began when he was four years old. He performed with his grandfather, harmonica player Roy Burcher, and his best friend, Charlie McCoy, of the Million Dollar Band (a country music group that performed regularly on episodes of the television hit series, Hee-Haw). As the musical director of Hee-Haw, Charlie invited Jeremy to play on stage with him from age five to his mid-teenage years. During those performances, Jeremy would open up for country music acts such as Jerry Lee Lewis, Mickey Gilley, Mel Tillis and many more.

As a youth, Jeremy also performed across Virginia locally with his grandfather, and sang on WCMS radio live country weekly music show with Carolina Charlie. In the early 1980’s, Jeremy entered the National Country Music Competition where he won first place in the junior vocalist category, four years in a row.

At age 10, Jeremy began playing harmonica which included lessons from his grandfather Roy Burcher and Charlie McCoy. By the age of 15, he was playing on the main stage at SPAH (Society for the Preservation and Advancement of the Harmonica) and other national harmonica conventions around the US, often sharing the stage with Charlie Musselwhite, The Harmonicat’s Don Less and Jeremy’s friend and longtime mentor, Lee Oskar.

At age 16, Jeremy was featured on the national nightly news with Peter Jennings as one of the youngest professional harmonica players in the US. During his high school years, Jeremy was heavily involved in show choir and theater, taking on lead roles of several productions. He became interested in magic and started hanging around local magic stores, learning the art of illusion. After apprenticing with professional magicians and building up his own magic collection, Jeremy The Magician started performing professionally at parties and venues across the Hampton Roads area.

His junior year, he recruited four of the best singers he knew from his high school and formed an A Cappella group called the Skool Boyz. The group quickly gained notoriety and would perform all over the East Coast, opening for acts such as Keith Sweat, Ray Charles, The O’Jays, The Whispers, The Temptations, and Phyllis Hyman. The group would go on to record three songs produced by Leon Sylvers from the 1970’s Platinum Group. In 1993, Skool Boyz were invited to perform on The Black Entertainment Television show, Teen Summit. The group broke up in 1994.

In 1996, Jeremy was invited to attend University of Central Oklahoma on a full-ride scholarship to study music and vocal performance. As a freshman, Jeremy got the lead role in the play called “Fool For Love” by Sam Shepard. During his summer breaks, he would return to Virginia to perform at Busch Gardens Williamsburg. In the summer of 1997 Jeremy was approached by a talent agency to sing and do voice-overs for cartoons produced by CBN (The Christian Broadcasting Network).

After college, Jeremy moved to Nashville to follow his dreams of becoming a recording artist, where he began working as a studio demo singer and harmonica player.

Jeremy ventured away from music for a few years, and then started his own karaoke business, performing in local venues until he found his way back into the studio. And now, he’s happily re-immersed in the wonderful world of making music with his Lee Oskar harmonicas and a rich background in music as his muses.