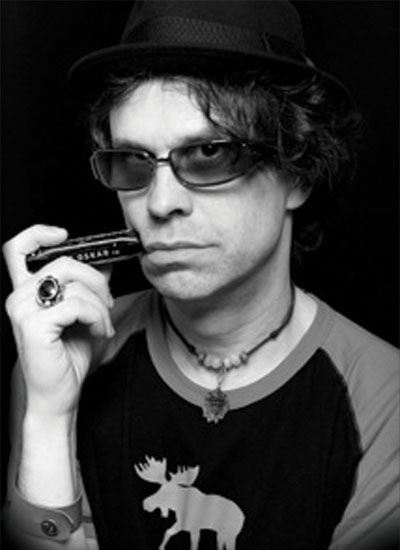 Toronto singer and harmonica player Jerome Godboo is always improving himself, as a musician, a man and a communicator. An accomplished and exceptional bluesman, his bending harp skills have been sought by everyone from Ronnie Hawkins to the late Jeff Healey and he continues to mesmerize all who witness him onstage including the judges at the International blues Challenge 2014 held in Memphis where Jerome took home the Lee Oskar best harmonica Player award.

The one-time local legend of explosive 90s rock band the Phantoms, Jerome has released 14 albums in his 25-plus year career, 11 of which are solo, including the brand new Sanctuary City with drummer Gary Craig and Spin Doctors guitarist Eric Schenkman.

Produced by Dave Misener – a top talent Jerome magically discovered working as a gardener in High Park – the album includes 12 contemporary blues originals from the welcoming title-track about Toronto to the chunky groove “Hidden Things” about covering up the pain; the soulful plea “Lord Show Me How” to be a better man to a reworking of the Phantoms song “Mon Amie” about every past girlfriend rolled into one. There’s even an eponymous song about his good friend Jerry Stone, owner of local bar Stone’s Place.

“I empty myself a lot,” Jerome says of songwriting. “Every day I meditate and I just look past all the thoughts and better ones keep landing in, the more I get rid of the little worries. I just look around and something will inspire me.”

Jerome, now a father of two, a teenager boy and preschool girl, was “pleasantly provoked” to write Sanctuary City after Eric asked him at a gig if he had been writing any new songs. “I always am,” says Jerome, “but I kind of went into a bit of a drama and said, ‘No, I’m not writing anything; all I do is change diapers.”’ Eric responded, “Maybe you should write anyway.”

The process took a year, but that’s what Jerome did – with the help of Eric, who in between his commitments with the Spin Doctors, would pop over to Jerome’s house unexpectedly and get to work. “Hidden Things,” “New Years Eve” and “Pollyanna Reed” were all co-written with Eric. Gary joined them on the writing of “Sanctuary City” and Eric gets sole credit on “Fortune Teller.” They recorded the album at Donlands – the same building the Phantoms recorded in when the late Billy Bryans owned the studio – with Dave Misener.

“I knew Dave from the park through my wife,” says Jerome. “He said, ‘I want to record you.’ ‘I don’t know, you’re just a guy sitting with an acoustic in a park who’s a gardener.’ But he just kept saying the right things. ‘We’ll do it on vintage gear,’ for example. And he kept saying the right things all the way through the project. ‘You don’t like this? Then sing it again; play it again.’ And we just kept tweaking and massaging it for over a year.

Jerome has been a full-time musician since 1986, when he won an Ottawa Bluesfest contest that helped launched his career and triggered a move to Toronto. That was the start of the Phantoms and an inspiring time that took the explosive rock band to sell-out status in the city’s top clubs from the Horseshoe to Lee’s Palace to the Phoenix (then the Diamond). And even when the Phantoms reluctantly called it quits, Jerome never did.

“It’s almost like I’ve operated independently of just about everything in the music business, and it’s great,” says Jerome. “Toronto, Ontario, has just supported me.”