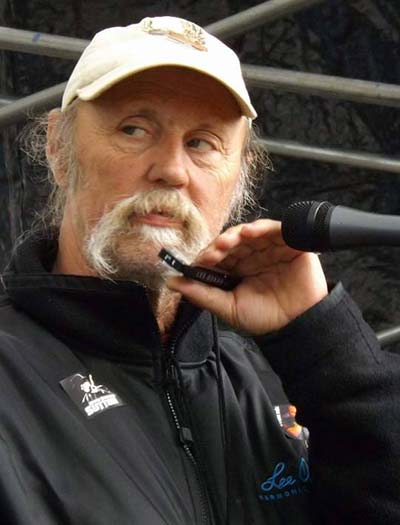 Jim McLaughlin remembers the exact moment when he started playing the harmonica: May 5, 1975, between 3:00-4:00 in the afternoon… and he has not stopped since!

Jim is adored and honored for his harmonica techniques, in his hometown of Everett, WA as well as all over the world.  He has toured the US, Canada, Mexico, Japan, Australia, Europe, and the West Indies.  He has given workshops all around the nation as well as Australia and Europe; assisted many professional and renowned players on the overblow techniques. Jim has been honored with many awards and won many competitions including, the International Harmonica Organization “World Harmonica Championship” in 1991/92. He has been the Washington Blues Society “Lifetime Achievement Award” honoree and a Hall of Famer.  And, he was the Washington Blues Society “Best Harmonica Player of the Year”, three years in a row. He is also recognized for his harmonica knowledge and expertise in harmonica maintenance.  He currently works for Lee Oskar Harmonicas as a Service Specialist.

He continuously builds on his knowledge gained from attending professional music theory and jazz improvisation classes, and he later taught harmonica at University of Washington Experimental College.

Jim is often welcomed on stage as a guest artist or a band accompanist.  He has joined notable bands such as: the original band WAR, Bill Monroe, Vassar Clements, Mark O’Connor, Townes Van Zandt, Nitty Gritty Dirt Band, Bela Fleck and the Flecktones, the Wooten Family Band, Tommy and Phil Emmanuel, and the Everett symphony Orchestra and many other local & national acts.

Jim is locally celebrated for producing his Freedom Fest Event since 2010, a 4-day event, which recently hosted 44 bands with over seven thousand attendees. The highlight includes his “Harmonica Hell” act, during which as many as 42 harmonica players have shared the stage for a one-hour collaborative harmonica set.

You can catch Jim at one of the local jams, or with the McLaughlin/Sutton Duo, The Blue Monday band or Bobby Holland and the Breadline band.