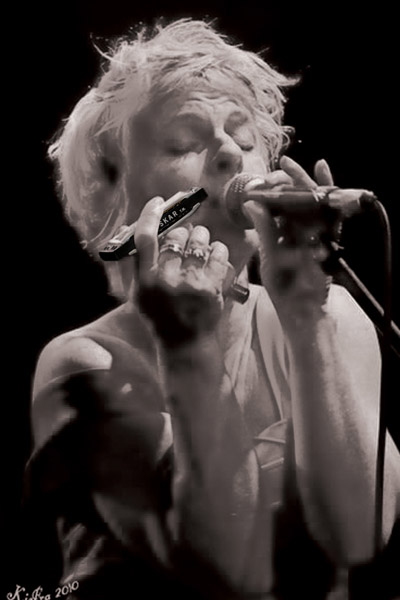 She stands a mere five feet tall, but don’t let her tiny stature fool you, Kellie Rucker is a very BIG talent.

Over the course of a professional career that has spanned more than 35 years, she has appeared on the bill or onstage with such legends as Dizzy Gillespie, Stephen Stills, Albert Collins, James Cotton, ZZ Top, Dan Hicks, Warren Zevon, Little Feat and B.B. King.

Kellie has become a recording artist in her own right, with 3 CD releases, “Ain’t Hit Bottom“, “Church of Texas“, and her latest project, “Soul Return” on Dixiefrog Records. All three were recorded in Los Angeles, and feature the finest in L.A. talent.

Her command of the blues harp and her powerful singing voice have made her a key ingredient on recordings and live shows with legendary blues guitarist B.B. Chung King and Grammy nominee, Jon Butcher. Her work can also be found on discs by such diverse artists as L.A. Guns, Corey Stevens, B.B. Chung King and the Buddaheads, TV Commercials and on the German TV Crime Dramas, Tatort and Zoko Liepzig.

Born in Oklahoma City, Rucker and her family moved often, making stops in Texas, Virginia and the Florida Keys before settling in Mystic, CT. She took up the harmonica at the age of twelve, and as a teenager had the habit of sneaking into blues clubs to see influential performances by Johnny Winter, James Cotton, James Montgomery, and Roomful of Blues. At 17, she headed west to Denver, where she formed her first blues band, Blues for Breakfast.

She loved the Rocky Mountains, but longed for the warmth of the Southeast and returned to the Florida Keys. There she happened to join forces with the Bill Blue Band, with whom she eventually toured in Scandinavia.

In 1985, Rucker came to Southern California and settled briefly in the San Diego scene before migrating north to Los Angeles, where she Albert Collins’ guitarist Debbie Davies. She and Davies formed a band that toured extensively along the ‘left coast’ for over two years.

As her harmonica playing evolved, Rucker began to feel limited by her role in a traditional blues band and she sought to expand her musical horizons. She caught the attention of noted electric blues guitarist, B.B. Chung King, and after sitting in a few times was invited to join his band, The Screaming Buddaheads. She recorded and toured with BBCK for over five years, becoming a sought after ‘gun-for-hire’ harmonica player and singer on Los Angeles recording sessions.

These days, Kellie is based in Gainesville, Florida and continues to perform in concerts all over Europe performing her own material from her CDs and will begin new recording projects while in Europe in between tour dates. Kellie has new projects underway, so please stay tuned!