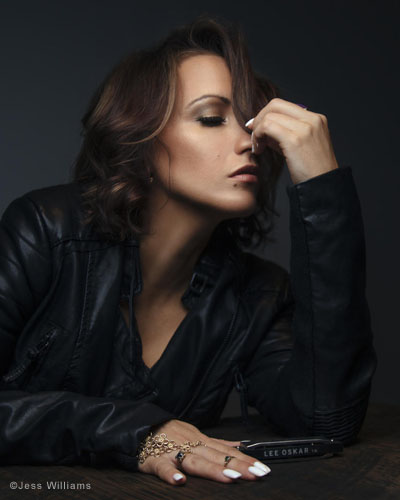 Laura is a multi-talented singer-songwriter and Lee Oskar Harmonica player, who lights up the stage with her versatile and vivacious musicality. Welcome to the LOH circle of friends, Laura. You’re one of a kind!

Journeying to Nashville to make the pivotal album, she credits the connective creative energy of Music City and a close working relationship with the album’s producer, two- time Grammy winner, Shannon Sanders (India.Arie, John Legend, Robert Randolph) with instilling the necessary focus to turn such personal stories into universally themed gems that resonate with the listener from start to finish.

Laura’s magnetic versatility shines through on The Awakening, with gems like the empowering “Struggle,” or the upbeat “Wake Up,” which has been featured on VH1’s hit show ‘Hollywood Exes’ and the Alicia Keys indie film endeavor ‘The Inevitable Defeat of Mister and Pete.’

Best known, previously, as the front woman of the south eastern/jam-based funk band Laura Reed and Deep Pocket,  she tabled the funk/Reggae-informed shadings for a more intimate but accessible exploration on The Awakening.

Laura’s savvy musical chops and years of working-band experience also served her in crafting the cornerstone album of her career. She has been joined by some stellar singers and musicians on multiple past projects, including George Clinton, Killer Mike, Karl Denson, Robert Randolph, The Big Ol’ Nasty Getdown and Jewel. She’s also shared stages with a star-studded list of artists including  Mali Music, India.Arie, Miguel, Daley, Valerie June and Anthony Hamilton, among others. She was recently invited to perform at New York’s famous Madison Square Garden to sing the National Anthem, wowing fans with the breadth of her astonishing vocal command and range.

Drawing comparisons to seminal female vocalists such as Lauryn Hill, India.Arie, and Amy Winehouse, she is proud of how only the strongest musical efforts won the day in making The Awakening. “It’s funny, for making a solo album – I really did check my ego at the door,” she admits. “I’m a singer who is never shy about her opinions. What’s great about Nashville is everyone has a unique idea about each song. The ideas that stuck were the best ideas, and that comes through on every song on the album.”