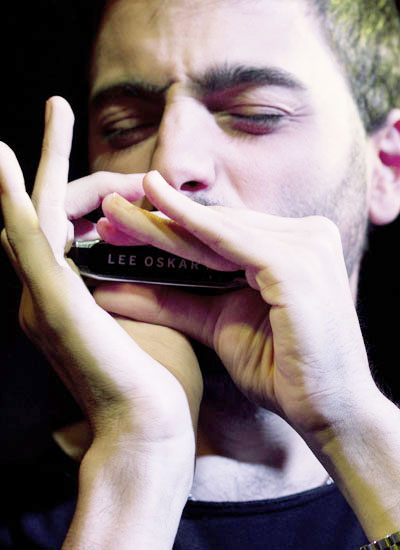 Martín Chemes is a professional musician and harmonica teacher.

He was born on September 28th, 1983 in the city of Rosario, Argentina.

Since his early childhood, he was passionate about music. During his teenage years he took piano and guitar lessons for some years and he also studied Music Theory at the school of music in his city. When he was seventeen years old, he discovered the diatonic harmonica, and he fell in love forever with this instrument. Soon after, he heard the great harmonica master Lee Oskar, who was a great influence on him because Lee showed to the world that any musical style can be played on the diatonic harmonica.

He has been working as a professional harmonica player since 2002 and as a harmonica professor since 2005, teaching private students and also in private educational institutions. He got the certificate as Professor of Elementary Education, having over 270 students in the last years.

He founded and took part of different local bands and participated in every edition of “Rosario Blues Festival” in his city and many other music festivals all over his country. He had numerous appearances on radio programs and television playing live. He has recorded as a special guest, a lot of hits on many albums by local artists.

With all the influences and the baggage of his musical experience, in 2012 he decided to launch his solo career, playing many different styles on his diatonic harmonica, composing songs and making versions of several classic tunes of melodic genre, an uncommon genre for this instrument.

In August 2015, he participated with his solo project at the International Harmonica Festival of Chile: “Armónicas de Fuego”. Sponsored by the Ministry of Culture he represented his country giving several shows and harmonica workshops in Santiago de Chile with the best exponents of this instrument in South America.

Currently he is working with his personal musical project performing live with his acoustic trio touring around South America, and recording his first solo album, which will be released soon, with the participation of international artists. This album is sponsored by the Ministry of Innovation and Culture of the Province of Santa Fe, and with the support and production of Lee Oskar Harmonicas ®.