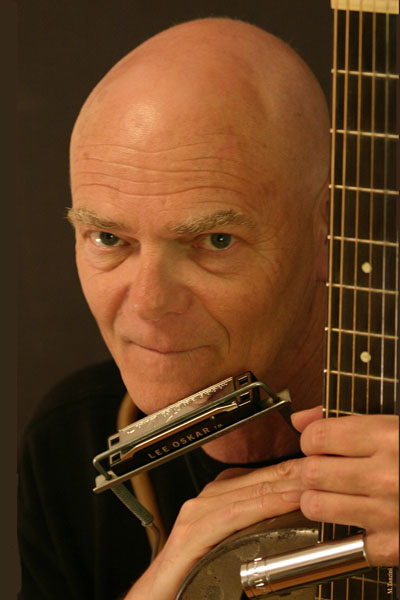 At the age of four he sang for his grandmother who tossed him nickels and dimes while she sat at the kitchen table sipping her whiskey – laced tea. His mother bought him a harmonica when he was about 13. Shortly after that he saw Sonny Terry and Brownie McGhee on tv and he was hooked for life. The soul of this timeless genre is deeply rooted in his psyche and he continues to nurture this passion.

Pickett embraces the Blues with style, substance and musical integrity. In the 70s, 80s, and 90s he established himself as a musically ground-breaking, electrifying singer/songwriter/harmonica player, leading seminal bands Whiskey Howl, Wooden Teeth, and the Michael Pickett Band. Musically profound, they pushed the envelope for Blues and funky Roots music. He provided the direction for all three projects and surrounded himself with some of the top musicians in the country.

Whiskey Howl was always a great live band but what truly made it stand out were the undeniable abilities of the band’s two lead vocalists: Pickett, one of the world’s most accomplished ‘harp players’ and the late John Witmer, arguably one of Canada’s most gifted R&B singers. Whiskey Howl was signed by Warner Bros. in ’72. The band toured coast to coast, from the late 60s to the early 80s, venturing into New York City to perform at The Village Gate and disbanded in ’81 following their high profile reunion gig at the El Mocambo in Toronto. A recording of that night has been released on CD – ‘Whiskey Howl Big Band / Live at the El Mocambo’.

Wooden Teeth (’76-’79) was a group of diverse musical talents coming together to create a raw, exciting, extremely tight progressive Blues/ Funk sound covering material from Little Feat to Tower of Power as well as several excellent originals and occasionally introducing the odd Jazz/Fusion instrumental. The band was contemporary, knocking out a class of rocking, infectious Soul that was tight enough to be called professional and improvisational enough to take it to the edge. The roster turned over until the core band took root with Pickett (vocals/harp), John Tilden (guitar), Omar Tunnoch (bass), and Vito Rezza (drums). One of the highlights of this band was opening for Papa John Creach, and backing up Big Mama Thornton, and John Lee Hooker at Massey Hall. (Hooker was late to arrive, trouble with a flight or something, and Michael met him for the first time on stage that night.)

Michael Pickett Band (’81-’02) clearly documented Pickett’s profound musical journey and his constant search for the ‘truth’ in the song, be it his own or a cover. The core band consisted of vocal/harp (Pickett), bass (Steve Chadwick), guitar (notably Shawn Kellerman), and drums (often Gary Craig). It was a rotating roster of exemplary musicians occasionally ballooning into a big band with keys, backup singers, and horns. Pickett was the one constant – the source of inspiration, imagination, and fearlessness. He worked without a net which meant no set list. He was all about establishing a groove and seeing where it would take him… and the band. Instead of being in the spotlight, as most harmonica work is presented, Pickett often layered his into the background. As a result, his arrangements were unique and highlighted the genius in his songwriting.

1998 was a banner year when he released his long anticipated and eagerly awaited debut CD, Blues Money. This all original recording was nominated for a JUNO and received the Jazz Report and Real Blues awards for ‘Blues Album of the Year’. Michael was also presented with the coveted Maple Blues ‘Blues With A Feeling Award’ in recognition of his passion and lifetime commitment to the Blues.

2000 saw the release of his second CD Conversation With The Blues which earned him another JUNO nomination and won the Canadian Indie Music Award for ‘Blues Album of the Year’. This extraordinary recording, described by Billboard as “transcend[ing] the urban Blues idiom”, is an eclectic mix of ten original compositions comprised of Blues, R&B, Soul, Jazz, Delta, and Gospel.

It’s worth mentioning here that Pickett laid down an acoustic resophonic guitar track on Blues Money… he hadn’t taken his guitar out of the box for over 20 years. He laid down another one for Conversation With The Blues. His focus was still on the band but he found himself steadily being drawn back into the realm of acoustic Blues which was how it all began for him as that 13 year old discovering Sonny Terry and Brownie McGhee. In 2001, he immersed himself in the guitar and was soon practicing up to 14 hours a day. With focus and diligence, this musical transition transformed him into a formidable guitarist on the six-string, twelve-string, and National Steel-Bodied Duolian. In the fall of 2002, the metamorphosis was complete. Leaving the band behind, he re-emerged revealing yet another layer of his seemingly endless reservoir of musical talents.

With exceptional award winning rack harmonica skills and powerful vocals, he delivers charismatic, compelling, and passionate performances that are charged with electricity and filled with authenticity, and a unique style. He puts his own spin on obscure tunes of legendary icons such as Robert Johnson, Bukka White, Mississippi John Hurt, Sonny Terry & Brownie McGhee and showcases his own potent material. This songwriter has evolved into an eclectic and captivating storyteller through Delta Blues, Country, Folk, and Americana, revealing a profound understanding of where this music comes from and why it stands the test of time.

Pickett now performs exclusively as a solo acoustic artist touring throughout Canada, the US, the UK. and Europe, appearing in Blues, Folk, Jazz clubs, coffee houses, house concerts, theatres, festivals and is no stranger to standing ovations and calls for encores.

He has hosted and participated in harmonica and acoustic guitar workshops over the years and is a professional, private instructor of these instruments. His presence in songwriting circles has proven to be extremely valuable because of his authentic representation/ interpretation of acoustic Roots/Blues.