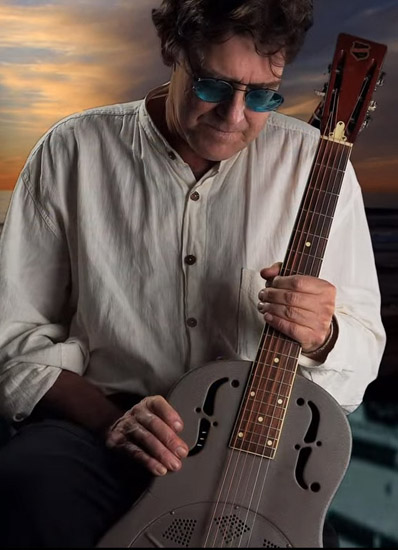 Steve White passed away, Friday, April 22, 2011 just before midnight. He was dearly loved by many of us. It’s impossible to put such things into words.

But you should know about his music. He lived in Southern California, 57 Miles from Mexico. He played small gigs along the coast, where the media-saturated and distracted audiences didn’t pay enough attention to know what a gem they were missing. He could make a living, because he toured Europe twice a year to audiences who did know. But that’s a different soapbox. If you like acoustic blues/roots music, then you have albums and albums of great music to listen to. Steve developed his own approach. He played a baritone guitar, double-dropped D, but sometimes tuned down to a low C or A. He used a percussive hand technique to keep the beat, and play the bass notes against the treble. On top of that, he was a killer blues harp player. With the harp in a rack, his unique right-hand groove and a slide on his pinky, you’d think you were hearing enough music. But that wasn’t all. He built an amplfied footboard and turned his feet into his traveling percussionist. When Steve got going, you just wouldn’t believe all that sound was coming out of one person.

But the best part was how damn musical he was. When you listen to Steve, especially on the many cuts where he was playing by himself, you have to appreciate that he was recording live, one take, no overdubs.

His dad was in the foreign service; so Steve learned to play the blues in Thailand. Never wealthy, never compromising, he worked day jobs, honed his craft, and never quit, never quit, never quit. The result was solid, sometimes brilliant songwriting, masterful playing, and a legacy of original songs that anyone can play, but only Steve could own. For the last 10 years, after developing connections with blues fans in Europe, he was happily able to make a modest living. On one of his tours, a film crew followed him around and produced some great footage that you can checkout on YouTube.

Most of all, Steve was a generous soul. His music is available and reasonably priced. And best of all, shortly before he was diagnosed with the cancer that silenced him, he made what might arguably be his best album ever, Home Away From Home (see below). You’re probably listening to some of it now, if you’ve got the site player going. Produced in Iceland with a quartet of great musicians, it will be released in the next month or so. One of the remarkable things about Steve was that music was simply something he breathed. He was trained as an artist, and he became a good one. Some of his album covers are from his paintings, but Home Away From Home is a treasure because it comes with a lyric booklet thats full of his artwork. If you want actual music right now to put on your iPod, head over to iTunes or CD Baby, or look thru his website. You like acoustic blues and roots music? I present the great Steve White.