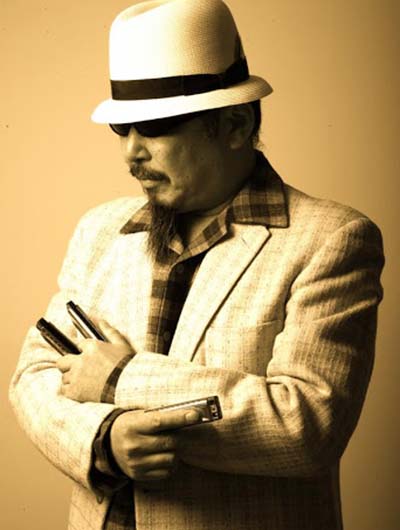 Tex has played harmonica on dozens of records, and played with the band WAR (harmonica and vocals)— first with some recording projects starting in 1993, and then, after Lee Oskar left in 1996 to form the LowRider Band*, he became a member of WAR from 1996-2006 traveling the world. Tex now plays with many of LA’s hot Blues and Latin bands. His harmonica playing has been described as “blues harp meets the Latin groove” with an outstanding tone.

Tex’s musical yearnings began with his interest in learning rock guitar, and by the age of 15, he mastered playing electric bass. Up until 1982, Tex played electric bass with his own Rock & Roll band throughout Tokyo. He then became interested in Fifties American music. Around that time, he switched to upright bass because of its Fifties sound, and began gigging with a root’s music rock band. In 1983, he started listening to an American blues show on the Far East Network of the U. S. Armed Forces Radio on his shortwave radio. This was when he was first introduced to the sounds of the harmonica, and his life changed forever.

In 1984, he took a harmonica class from the number one blues harmonica player in Japan, Ryuichiro Senoh, who primarily taught the Chicago Blues sound in the style of Little Walter, James Cotton, Junior Wells, and Sonny Boy Williamson II. That same year, Tex won a prize at the FIH Harmonica Contest in Japan, competing in the Blues Category. In 1986, Tex played his first US performance at the Apollo Theater Amateur Night Championships with the Japanese Rhythm and Blues Band, the Driving Wheels. He continued to perform in Japan as a studio musician playing harmonica for recording artists, movie soundtracks, and live gigs. Following the American Dream and looking for a band to join, Tex made the big move to Los Angeles in 1992. For several months he played with various local Los Angeles bands at nightclub gigs, concert halls, state fairs, weddings, and other smaller venues.

Eventually, he started sitting in on performances with major artists such as Lou Rawls, H. B. Barnum, and others. Tetsuya has had the opportunity to jam with featured acts such as Carlos Santana, Los Lobos, and Natalie Cole, as well as recording with Snoop Doggie Dog. In 1999, Tetsuya combined forces with blues guitarist/vocalist James Waldman. Together, they released an acoustic blues CD in 2002 entitled, “Down by the Riverside”. In 2002, he released a single-CD with two Latin Original Songs, entitled, “Walkin’ Through the Alley” and “Sunny Days in East LA.”

In recent years, Tex continues with his love of harmonica by playing with a variety of hot Blues and Latin bands in Southern California.