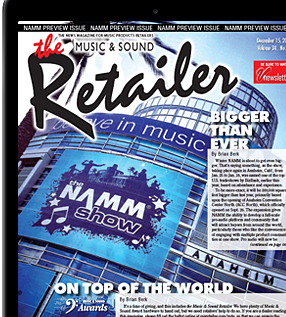 By Brian Berk for MSR

Lee Oskar has the rare distinction of being a big name in both the music and music instrument industries.

He is currently a member of the Lowrider Band, consisting of Lee and several of the original War artists, which can occasion­ally be seen on tour.

We aim to “make friends” with Lee Oskar in this month’s “Five Minutes With.”

The Music & Sound Retailer: Harmonicas were huge in Denmark where you grew up. Do you ever wonder what instrument you would have played and manufactured if you had grown up in the United States?

Lee Oskar: That’s interesting. I’ve never been asked that question. I’m not sure, but I may never have gotten into manu­facturing. There are a lot of people who love music but can’t channel that toward physically playing an instrument. They have “huge” ears and hear music just as well as, if not better than, most of us musicians. On the other end, I know people who can play many instruments but have “tiny” ears. In my case, when I got my first harmonica and I put it into my mouth and breathed into it, it really sounded like music to me. I felt like I was creat­ing symphonies—it was unbelievable! The harmonica is a perfect outlet for my creativity, since I love music. I hear music and I compose music in my head. But physically, I would not be able to play any other instrument.