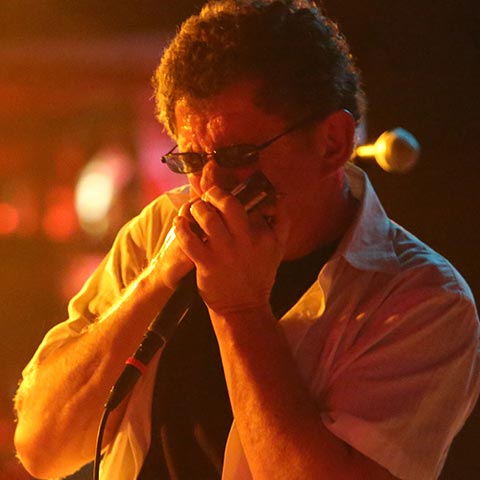 Another career highlight involves my idol, Ray Charles, and the time WAR headlined the show at Shea Stadium and he played before us. It was something else to watch him perform live and also to headline a show opened up by Ray Charles! Something very memorable happened that night. Though Ray played brilliantly, the sound system there was terrible, and I saw Ray getting frustrated with it, really struggling with it. Then when we came on, the same thing happened to me, it was really horrible! I was getting very frustrated as I couldn’t hear myself properly through the monitors, but the crowd was going crazy loving the music. As I was walking toward the dugout after the performance, so upset with what occurred onstage, someone reminded me that no matter what I was feeling about the lousy sound, the fans were thrilled with the music… and I should never let them down. So as fans were cheering, I smiled and acknowledged their applause. I never forgot that, and how important it is to appreciate those who appreciate your music.

But there was another equally important thing that happened in connection with this performance. I went in to tell the promoter, George Wein, that the sound system sucked. Everyone was in shock that I’d say this so bluntly to the promoter (who we were expected to kiss ass to) but I felt he absolutely needed to know and DO something about it. And, much to everyone’s amazement, Wein said, “The kid is right.” So an important moral to the story is, speak the truth. When you are young and naive about the business side of things, you care so much about having things right and it’s easier to just speak the truth, the way kids do, they just tell it like it is.

As people get older they can lose their naivete and learn to tolerate things in the name of “not rocking the boat.” But it’s worth getting it just right, to be sure that it’s the best that it can be, and not worry so much about getting people upset— you just do what you have to do to get it right in the best interests of you and everyone else to do a great show.

In the quest for excellence, you have to be true to yourself and true to the music.